In the Mind of the Expert: Mirko Lalli 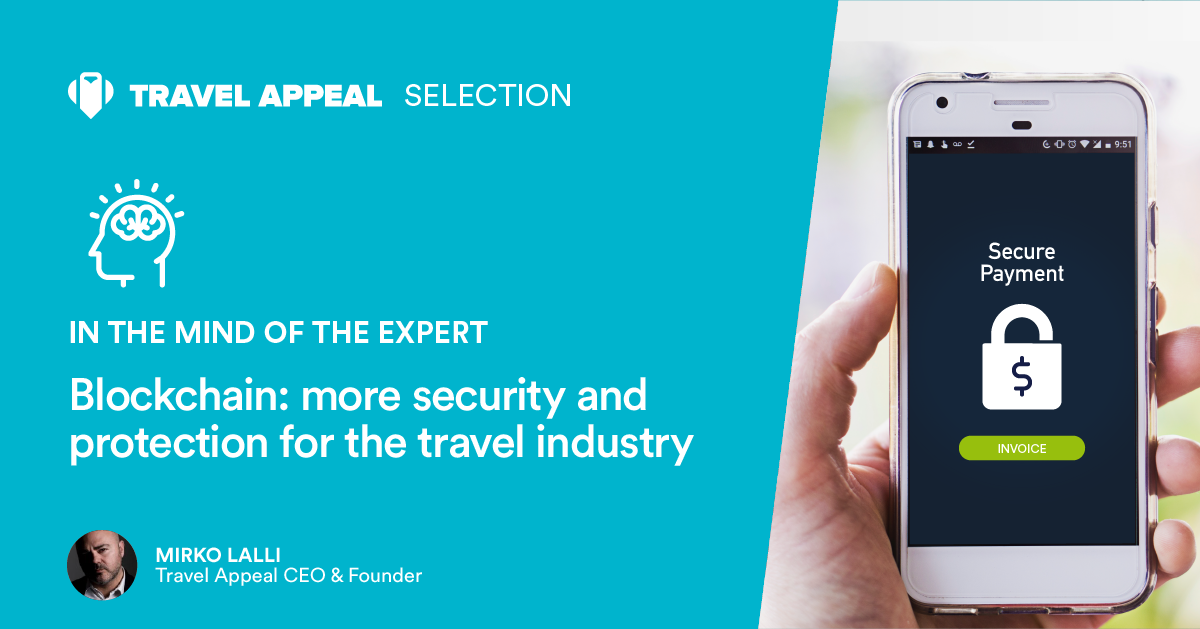 Blockchain: more security and protection for the travel industry

Over recent years, Blockchain has become one of the hottest topics in the technology industry, but what does this ubiquitous, buzzword really mean? We sat down with Mirko Lalli, CEO and Founder of Travel Appeal, to uncover how blockchain is impacting the tourism and hospitality sectors.

What exactly is blockchain?

After defining blockchain, it’s easier to understand its applications in tourism and hospitality.

According to Merriam-Webster, blockchain is “a digital database containing information (such as records of financial transactions) that can be simultaneously used and shared within a large decentralized, publicly accessible network”.

In essence, blockchain has the capabilities to improve the level of transparency through transactions and security in data transmissions by speeding up the process and making it more efficient.

After a recent interview between Mirko and Officina Turistica on the subject, we were inspired to learn more about how blockchain affects tourism.

"I’ll start by stating that I am not a blockchain expert. I'm just curious about the subject and studying it because I predict there may be exceptional developments in the future. This technology is taking its very first steps. The same doubts were also raised about the internet in 1997. “But will it really be useful in tourism?” was not such a strange question at that time.”

Blockchain and cryptocurrencies could be the next revolution, but the technology is yet to be perfected and applications have not been realized.

That said, there are already RealPOS and ATMs in place that allow for cryptocurrency transactions in Euros or Dollars. Credit cards linked to bitcoin accounts (or other currencies) are also arriving. “As it usually happens, technology becomes widely integrated and useful once the complexity disappears and takes a path of democratization (also from a cost point of view)."

Greater Security and Protection for Hotels and Hotel Chains

"The first thing that comes to mind for hotels is that they’ll greatly benefit from stronger protection in the event of no-shows or cancellations, through implicit mechanisms of smart contracts (i.e. protocols for conducting transactions). In today’s marketplace, a credit card is the only protection guarantee for hoteliers.

For example, if I automatically make a reservation when signing a “smart” contract, neither party can arbitrarily make changes. All the clauses are understood and binding to the transaction itself. If I book a room for 0.2 ETH (the Ethereum cryptocurrency) per night, with free cancellation up to 4 days before, the cost of the first night will be charged after that date and the remainder will be charged at check-in.”

Blockchain technology has created a last-minute mechanism to automatically re-sell rooms after the cancellation period, even peer-to-peer. It’s only a matter of time that the main booking engines will begin to leverage this opportunity.

“I am reminded of current technology in place, such as Civic, which aids in securing guest identity. Blockchain technology is greatly assisting in better managing the guest welcoming process and simplifying the hoteliers job.”

"Having a hub-based on cryptocurrency (not Bitcoin, which is too slow and obsolete for this) would expedite the booking process. Additionally, it would decrease all the fees and risks associated with the traditional currency exchange, which amounts to billions of dollars each year!"

"Using an online service or their smartphone, anyone could use this de-materialized and digital currency instantly, changing other cryptocurrencies and even traditional currencies without having to physically go to the bank. Also in this case, smart contracts could become an automatic adjustment tool."

Despite the initial objective of blockchain, giving power back to smaller parties, it's probably still too complex. Only a few subjects can benefit from blockchain if they do not accept these new payment methods. "Things are changing fast, and it's only a matter of time."