The 5 Italian Tourism Trends of 2019 You Need to Know 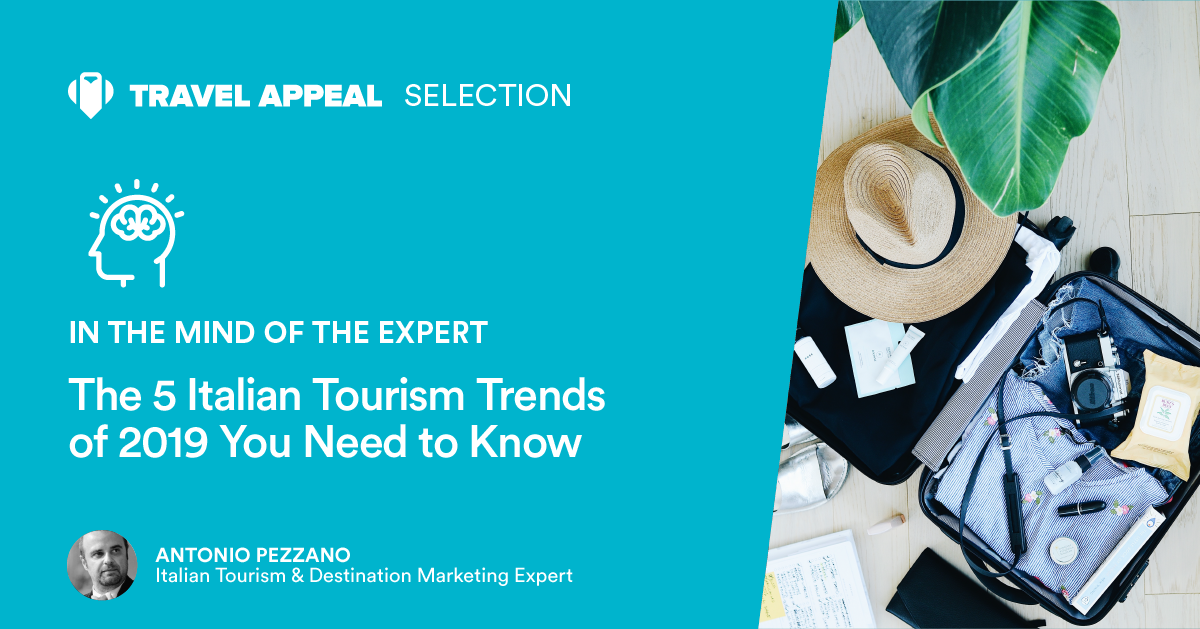 IN THE MIND OF THE EXPERT: ANTONIO PEZZANO

Back in January, Travel Appeal published The Top 10 Travel Trends of 2019. We shared our predictions for the trends that would have the greatest impact on the tourism industry in the new year.

We’ve teamed up with Antonio Pezzano, expert in Italian tourism and destination marketing. Exclusively for Travel Appeal, he reveals what we can expect from 2019 in the Belpaese.

From tariffs and lagging innovation to an increasingly hot climate, Antonio has identified five key trends that reveal how Italy will be affected over the coming year.

After seven years of continuous growth driven by international tourist flows, 2019 could be a difficult year for Italian tourism. Both the technical recession and index measuring the future climate in consumer perception reveal that Italian tourism could face challenges this year. The traveler's confidence index (measured by Istituto Piepoli) has dropped slightly, but does remain higher than in past years.

Antonio discloses, “If the climate of uncertainty lasts until spring, reservations for summer vacation will be affected. I hope I'm wrong. The predictions are not good, even internationally. The tariff war, rising oil prices and resumption of travel to Turkey and North Africa could create friction for the growth rates we have seen over the last few years.”

“Paradoxically, these conditions could facilitate additional investments driven by changes in ownership. In essence, the market penetration rate of hotel chains - especially international ones - in Italy could diminish significantly. This trend is off the radar for those who don’t directly work with investments, but in reality has positive implications for the entire tourism sector."

If countries do not trade amongst themselves, it not only creates a decrease in currency (and therefore less disposable income to travel), but also frustration among its citizens. This obviously harms tourism.

Antonio advises Italy to modernize. “Our country needs innovation. For this to happen, there needs to be a favorable investment environment. The closure of shops on Sundays, the limits for car rental services (NCCs), the risk of financing Citizen Salaries or increasing the VAT (including tourism taxes) and the mismanagement of public beach bids are just a few factors that stall tourism investments."

Last summer, northern Europe recorded abnormally high temperatures. Why go on holiday in the Mediterranean if North Sea beaches are just as welcoming?

TUI and Thomas Cook revealed that climate change was one of the reasons for a decrease in bookings during summer 2018. In fact, on February 7th, 2019 TUI lost over 1 Billion Pounds, decreasing the value of shares by 20% in a single day. This was a direct result of more northern Europeans vacationing at home during last summer’s heatwave.

Watch out for the temperatures in cities this summer, we are already at the limits of tolerability.

Antonio Pezzano supports public entities and tourism organizations in designing and implementing policies and projects that create economic value. His role is in particular that of providing data and concrete facts to decision makers. He served as coordinator of EDEN Network of European Tourist Destinations of Excellence on behalf of the European Commission.